The article contains a brief description of the Community-led local development approach (local development under the leadership of the community, CLLD) and the main purpose of its use in the European Union. The study indicated periods of the major initiatives to support local development in EU. Moreover the article posted CLLD approach principles’ evolution and the basic principles of the LEADER method and its application in CLLD, which can be applied in Ukraine. Subject to the provisions of the European Economic and Social Committee (EESC) for further CLLD-approach distribution the five trends were identified that must be considered when forming a Regional local development projects support system in Ukraine: Multi-fund financing; Unification; Networking and collaboration; Extending the approach; Simplifying the process. The characteristic of the present phase of CLLD-approach, in particular, of the European Network for Rural Development (ENRD), which attaches great importance to the dissemination of the most effective CLLD practices and establish partnerships between communities and territories where the approach is implemented. The study found out the relationship between Community-led local development and Community-driven development (CDD) supported by the World Bank. 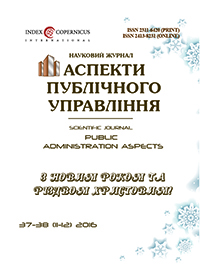 Published
2017-03-14
How to Cite
Udod, Y. (2017). Community-led local development approach principles implementation when forming a regional local development projects support system in Ukraine. Public Administration Aspects, 4(11-12), 63-69. https://doi.org/10.15421/15201663
Download Citation
Issue
Vol 4 No 11-12 (2016)
Section
Regional and municipal government
Authors retain copyright and grant the journal right of first publication with the work simultaneously licensed under a Creative Commons Attribution License that allows others to share the work with an acknowledgement of the work's authorship and initial publication in this journal.