The analysis of problems related to the determination of the «public service» category has been done and views on public service from the perspective of domestic scientists have been described in the article.According to the author’s opinion, the term “public” highlights the object of the service and it means that interests of the community and society – public interests – should be protected and executed.Public service is understood as the activities of government towards people, living in the territory of their jurisdiction. These activities are fulfilled directly through the public sector. It has been grounded that while studying the civil service of the EU member states’ the term “public service” is the most reasonable term to be used, as it emphasizes exactly the public character of the personal activity.While determining public service boundaries, it has been considered that the institutional approach is the most reasonable one as it limits the public service sphere by public administration in other words, in Ukraine these are primarily executive authorities and local self-government. Therefore another attribute of public service has been added by author, this is the fulfillment of administrative (managerial) functions and powers on a permanent basis. It has been emphasized that regardless the distinguished understanding of the concept of public service by different countries, public administration has been mostly focused on the public officials status regulation. This accent is even more explicit and distinct in the latest legislation of the European countries. 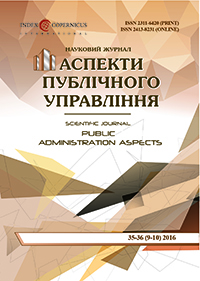 Published
2016-08-09
How to Cite
Sidorenko, N. (2016). Interpretation of the concept of “public service” with consideration for foreign experience. Public Administration Aspects, 4(9-10), 71-77. https://doi.org/10.15421/152016852
Download Citation
Issue
Vol 4 No 9-10 (2016)
Section
Personnel policy and public service
Authors retain copyright and grant the journal right of first publication with the work simultaneously licensed under a Creative Commons Attribution License that allows others to share the work with an acknowledgement of the work's authorship and initial publication in this journal.