Problem setting. Pension provision of citizens is among the priority tasks of social policy that is constantly on the agenda of public administration in developed countries. Under current conditions, the formation of the optimal pensions model that takes into account social and economic aspects of society is an important task for the state. Recent research and analysis of publications. There are certain theoretical and scientific achievements in the area under consideration. A significant contribution have been made by researchers and scientists in various fields, including V.Bessarab, I.Hnybidenko, M.Kravchenko, O.Krentovska, E. Libanova, B.Nadtochiy, A.Nechay, V.Skurativskyy, V.Tolub and others. However, some issues related to reforming of the pension system require further study with due regard for further modernization of state social policy. The paper objective is to review the European experience in reforming the pension system in the context of its possible application in the realities of current Ukraine. The main body of paper. Reforming of pension systems in Europe relied on the rapid aging of the population and increased pension burden on employees. Thus, in 2010, the EU population over 60 years made up about 24%, up to 2040, according to the experts, it could reach the figure of 35%, an increase by more than 10%. Thus, the population of working age (20-59 years) will decrease from 54% to 47%, or by 7% during the same period. Currently, pension systems in most European countries are based on the three-level models that include unfunded pension scheme with the provision of basic pension and funded one (mandatory and voluntary) scheme and are combined in different options. Analysis of pension systems in some European countries, including Great Britain, Germany, Denmark, the Netherlands, Finland, Sweden, shows that their reforms were carried out in the following directions: increasing the retirement age (for men -  to 65, women - 60 years); extending the period of insurance and contributions to pension funds of the country; changes in the procedure of the pension benefit indexation; encouraging the development of additional professional programs of funded pension schemes and personal pension insurance; increasing premiums and upgrading the base for their calculations. The issue of retirement age is the most painful for all EU countries, as it affects the interests of several generations, present and future pensioners. The general trend towards increasing the retirement age is influenced by a number of demographic, economic and social factors: increased life expectancy and its active period; limited manpower; possibility of employing the professional and intellectual potential of elderly staff; the need for  spreading out  the base of contributors for the pension budget increase; preventing the risk of the poverty expansion among pensioners; smoothing the gap in living standards of the employed and pensioners. For our country, like for most European countries, the problem of population aging and, consequently, increased demographic burden is one of the biggest problems. The aging process of the Ukrainian nation is characterized by the rapid growth of the number of people aged over 60 years. According to demographic projections for 2026, their share will increase to 25%. In this situation, the only solution is to reform the pension system of Ukraine. It would be reasonable to adopt the European system of pension insurance as an example. Conclusions of the research. For our country, further study of the European experience and successful workable solutions will be useful with regard to their application in the process of building and reforming own pension systems, thus avoiding the negative trends caused by socio-economic realities of modern society. 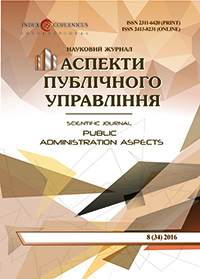