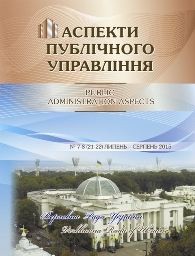 Published
2015-08-20
How to Cite
Kornat, L. (2015). Perspectives of integrating multiculturalism theory appliance in development of the conceptual approaches to the management of ethnocultural diversity in Ukraine. Public Administration Aspects, 3(7-8), 11-19. https://doi.org/10.15421/151553
Download Citation
Issue
Vol 3 No 7-8 (2015)
Section
Theory and history of public administration
Authors retain copyright and grant the journal right of first publication with the work simultaneously licensed under a Creative Commons Attribution License that allows others to share the work with an acknowledgement of the work's authorship and initial publication in this journal.