On the basis of analysis of scientific sources certainly necessity of the use of mechanisms of partnership for a management a city, the problems of introduction of mechanisms of partnership are analysed at the level of city. Certainly basic factors which influence on efficiency of the use of mechanisms of partnership at the level of city, namely: absence of effective possibilities for valuable and system control from the side of society after activity of local advice, shortage of information on maintenance of decisions which are accepted city advices, complication of control process after implementation of policy in town, imperfect accounting about activity of organs of local government, opaque budgetary processes, absence of the co-ordinated and corrected policy of partnership, imperfection of legislative base of partner relations; unclear determination of role and status of participants of partnership; underestimation by the organs of local government at the level of city of human capital; absence of the proper propaganda of positive examples of partner co-operation; absence of the adjusted connections which would be instrumental in the exchange of realization of social and business projects experience; absence of financial base. It predetermines the necessity of scientific research of essence and maintenance of partnership as forms of balance of interests of organs of local government and public and business space, modern mechanisms of their cooperation, as to the instrument of the investment-innovative providing of development of cities. By an important purpose any of forms of partnership there is bringing in of investments for the decision of set social-economic tasks, important for a grant public services and upgrading life, in town. In many countries of the world, since the 1960s and 1970s, regional development issues have become increasingly important for central and regional authorities. In parallel, the understanding of regional development, radically changed in the global economy and governance, radically changed. Great influence on the modern theory and practice of regional development management has made the processes of globalization, which significantly changed the modern world. 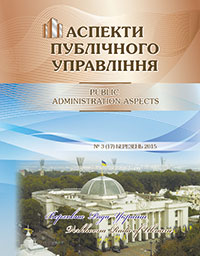