In the article the analysis of development of defensive-industrial complex of lead nations of the world is conducted , namely the United States of America and countries-participants of European Union and NATO. Also in the the article control system of the defensive-industrial policy of the USA is schematically represented. The analysed materials gave an opportunity to draw conclusion, that guidance of military industrial concerns of the USA managed clearly to define acceptable strategies of restructuring and successfully to realize them, integrating new enterprises with the use of front-rank methods of organizational management that became the basic engine of development of defensive industry of the USA. To the number of basic progress of defensive-industrial complex of lead nations-participants of NATO and EU trends it is possible to take the following: creation of the large defensive-industrial integrated structures on development and production of modern armament and military technique on national, transnational and transatlantic levels; rapprochement of military and civil sectors of economy; large corporations go across from mass to the «flexible» production, due to what it is possible to arrive at high efficiency of production of weapons and military equipment even at small series; through diminishing of volumes of assignations on the purchase of defensive products and considerable complication of the modern systems of armament, some leading defensive firms-contractors began to work from the production of armament and military technique to scientific research-and-developments. 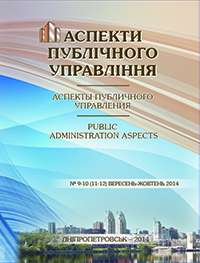 Published
2014-11-25
How to Cite
Salnikova, O., & Sytnik, H. (2014). Tendencies of development of defensive-industrial complex of lead nations of the world. Public Administration Aspects, 2(9-10), 56-65. https://doi.org/10.15421/151468
Download Citation
Issue
Vol 2 No 9-10 (2014)
Section
Mechanisms of public management
Authors retain copyright and grant the journal right of first publication with the work simultaneously licensed under a Creative Commons Attribution License that allows others to share the work with an acknowledgement of the work's authorship and initial publication in this journal.